The Story of Curly 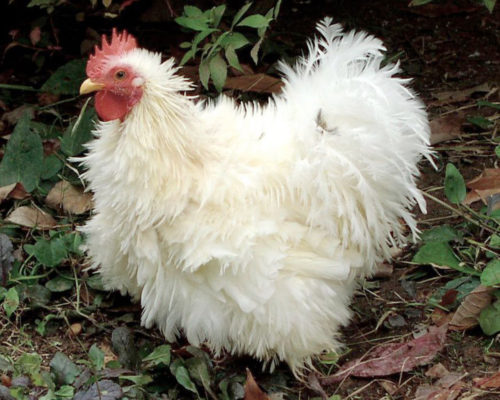 The Frizzle Rooster of Haycock-a-Doodle Farm

Many years ago there lived a happy flock of chickens who free-ranged on Haycock-A-Doodle Farm in Haycock Township, upper Bucks County, Pennsylvania. There were 15 of them, all standard-size breeds: Rhode Island Reds, Barred Rocks, White Leghorns, Araucanas and Buff Brahamas.

The farm was owned by Natalie and Clint Searl. One day, the Searls decided to add some Frizzle chickens to the flock. A Frizzle is a bantam-sized chicken whose feathers curl outward, rather than laying flat as in most breeds. They went to a Frizzle breeder at a nearby farm and brought home five freshly-laid Frizzle eggs. They tucked the eggs under a sitting hen who hatched them three weeks later.

Frizzles come in three colors: black, white and red. Out hatched a black chick, a white chick and three red ones. They grew to bantam (small) size and mixed in happily with the regular-size flock. Natalie and Clint named the white rooster Curly for his beautiful curly white feathers. His black-feathered brother was called Shorty. The hens were red.

Curly and Shorty hung out together. They knew they were small, so they let people pick them up They were very gentle and friendly. Curly was the star of the flock. The Frizzles all lived long and happy lives.